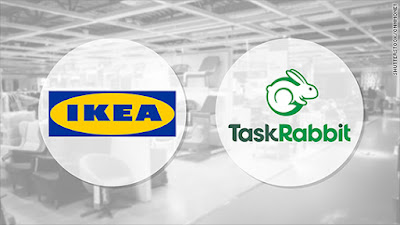 Tens of thousands of Americans have tasks that they don't want to do themselves. Either the jobs are physically impossible, or require skills that they don't have, or are simply not worth their time. In an effort to address that common problem, in 2008 Leah Busque founded a company called RunMyErrand, which later evolved into the app known as TaskRabbit. People around the country can use the app to hire "Taskers" to run errands or do odd jobs, and TaskRabbit keeps a percentage for connecting users to workers. According to Tracey Lien and Samantha Masunaga's L.A. Times article, Ikea recently acquired TaskRabbit in order to pair up furniture-building Taskers with Ikea's customers.

TaskRabbit was one of the very first on-demand apps, where users could pay a fee or an hourly rate to get a job done. Since then, many other companies have come in to fill the market, from Uber to Postmates and everything in between. The acquisition of TaskRabbit was a logical one for Ikea because their customers generally already outsourced the job of putting together their furniture anyway. Many customers can't figure out how to assemble Ikea furniture, so it is often simpler for them to hire someone to do it instead. By acquiring TaskRabbit, Ikea is able to get the business on both ends.

From another perspective, Ikea acquired TaskRabbit as an investment, given that the app has been pretty successful over the years since its conception. The company provides a smartphone app that allows Taskers to connect with users looking to hire help. In exchange for providing the service and convenience of their app, TaskRabbit receives 30% of the hourly payment being given to the Tasker completing the job, which is a pretty large chunk of money when movers and furniture assemblers can be making anywhere between $30 and $80 per hour. Neither company has released a public statement about how much the company sold for, but it can probably be assumed that Ikea made a sound investment.

Other on-demand service companies like Uber and Lyft or Sprig and Homejoy have either had to rely on millions of dollars in venture capital and debt financing or have failed to raise enough money and have had to go bankrupt before ever obtaining success. TaskRabbit is different in that it's been profitable for quite a while. The company's acquisition by Ikea is probably a good thing for its future growth. Now that they are connected to the largest furniture company in the US, they have the resources to expand more rapidly and reach a larger, international base of customers.

Last week, an exciting opportunity arose for cities throughout North America. Amazon Inc. announced its plans to expand further by building a second headquarters, dubbed HQ2. Since the announcement, mayors and governors across the United States have been submitting proposals and offering tax incentives to the giant company, trying to get Amazon to choose them. According to Andrew Khouri's L.A. Times article, California won't be offering quite as much as other states when it comes to tax incentives, but instead, will be relying on its inherent attractiveness as a metropolitan area with good weather, education opportunities, and skilled laborers.

In some states, like Wisconsin or Nevada, billions of dollars in subsidies and tax incentives are offered to manufacturing and tech companies looking to make a move. They hope that the tax incentives they provide initially will be paid off in the future by thousands of more jobs in the area and an improvement in the housing market. Wisconsin is in the process of working out a $3 billion package with television producer Foxconn. In 2014, Nevada's $1.3 billion package earned them Tesla's lithium-ion battery factory, a factory that Governor Jerry Brown has been vying for.

The amount of money being offered may not matter as much for landing the Amazon deal. Amazon is one of the wealthiest companies in the world, and they have made the parameters of their new headquarters well known. They are looking for a metropolitan area with skilled workers, desirable housing, good distribution routes, and a strong base of customers. With its shipping ports, high quality of life, and many prestigious public universities, California could be a strong choice for Amazon's second headquarters.

Analysts believe that Amazon's main purpose in being so public about their search is to try to get competing offers from different cities so that they can use them to leverage a better tax incentive package from whichever city they actually want for their headquarters. That's why they believe that California has a good chance. Research shows that around 90% of the time, companies would choose the city they chose whether they got the same incentive package or not. It really seems to be up to California itself to shine. Either Amazon wants to build HQ2 here or the company doesn't. The amount of money being offered is unlikely to make much of a difference.

How to Choose a Rewards Credit Card That's Right for You 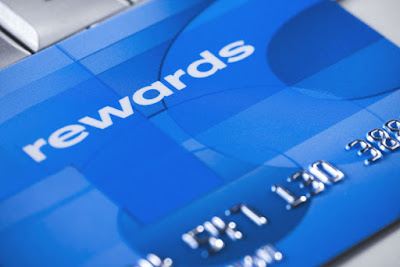 Credit cards can have many uses to different consumers. For some, it is a convenient way to keep their finances organized: spend money on the credit card all month, then pay one bill at the end. Others use credit cards to spend money that they don't currently have so that they can pay off the bill later when they have the money to pay it. Still others use credit cards for the sole purpose of building credit, to help them get lower APR when buying a car or getting a mortgage on a house. For many users, according to Chanelle Bessette's L.A. Times article, it's the rewards and extra bonuses that interest people in various credit cards.

If used properly, rewards credit cards can help users to get cash back, airline miles, and other perks. However, as with anything, there are both pros and cons. The best rewards cards give thousands of points as a signing bonus for charging a certain amount of money in a designated amount of time. Then, they offer points (or miles or cash back) for every dollar charged to the card in the future. Users can often get a flat amount of cash back on every purchase or can get special rates like 5% cash back on gasoline purchases. Some cards offer miles on airlines, which can essentially let you fly almost anywhere in the world as a reward for spending on the credit card.

On the downside, many of the best rewards cards have annual fees. The better your benefits from a rewards card, the more likely it is that the annual fees are high. For some cards, the annual fees can be hundreds of dollars, so they are more beneficial for people who will use them a lot in the year, gaining as many rewards as possible. Also be aware that some rewards cards extra fees when used overseas, or may not even be accepted by overseas vendors.

So, when deciding if a rewards card is right for you, there are several factors. Do you have great credit? Better cards require higher credit scores.  Do you often carry a balance on your credit card? Rewards cards tend to have higher APR, so the interest you pay could outweigh the rewards. If you travel a lot, a rewards card that offers mileage could be a good choice. If you spend a lot of money in certain categories each month, like gasoline or groceries, you can choose the right rewards card for you to maximize your benefits. All in all, there is no right or wrong answer. Rewards cards should be obtained only after careful consideration, on a case-by-case basis. 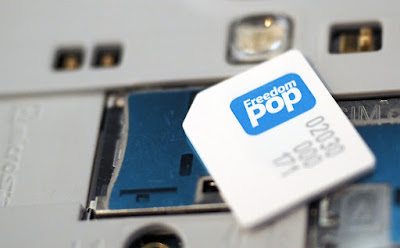 In the United States, from the wealthiest entrepreneur to the poorest student, from teenagers to retirees, almost everyone has a cell phone. While cell phones were once a conveniently mobile alternative to landlines, to allow people to make calls outside of their homes, from almost anywhere in the world, they have now become much more than just phones. With the advent of text messaging and smartphones, many users now rarely use their phone for calling, opting instead to text or surf the internet using their mobile data or surrounding Wi-Fi signals. Most cell phone providers, especially the "Big Four" carriers, charge upwards of $40 per month for a cell phone plan. According to Paresh Dave's L.A. Times article, there's a smaller company, called FreedomPop, that is able to provide users with cell phone plans for less than $5 per month.

FreedomPop isn;t the ideal cell service provider for everyone. In fact, they only have about 2 million customers, compared to the hundreds of millions of subscribers at companies like Verizon or AT&T. About half of their users have service for "free," although they do have to pay a monthly fee of $7.99. The "free" portion of their service has limits on data usage, calls, and texts, and their customer service hasn't been rated very highly, but for many people, their low prices make the switch a no-brainer. Some of their most all-inclusive plans include unlimited talk, text, and data for around $20-30 per month, which is significantly less than their larger competitors. Users mainly have to have a credit card attached to their account, and they get charged extra fees for going over their allotted usage, but users seem to feel that the low prices make it worthwhile overall.

The company is able to keep prices so low by going against common industry practice. At its inception, the main focus of FreedomPop was to provide everyone with access to the internet. To do that, they chose to accept lower profit margins, which means they can charge less for their service. Even though the company's user base is small, it has had enough of an impact on the industry that large competitors like Verizon and T-Mobile are lowering their prices in response. The goal of FreedomPop is to gain as many customers as possible, around the world, both to achieve their vision statement and to maximize revenue. The more revenue they take in, the more room they have to cover their fixed costs and provide service at a low price. Besides the lower profit margins, FreedomPop cuts costs by minimizing the amount they spend on marketing and by doing careful research on exactly which potential customers they choose to target.

FreedomPop has received over $100 million in venture capital investment to keep doing what they're doing. They are also looking at an acquisition offer, but investors don't seem interested in selling the company. FreedomPop is different from other cell service providers. They handle customer service efficiently by providing refunds when they receive complaints (modeled similarly to larger companies like Google Express) because they have found that giving a $5 reimbursement immediately makes a customer more likely to stay with the company and provide good reviews. However, as would be expected with a company that provides service at an average of $15 per month, customer service and quality sometimes have to suffer to some extent. It's really a choice that each customer has to make. Do you pay more for service through a "Big Four" company (Verizon, AT&T, Sprint, or T-Mobile), or do you pay less for a up-and-coming company like FreedomPop?