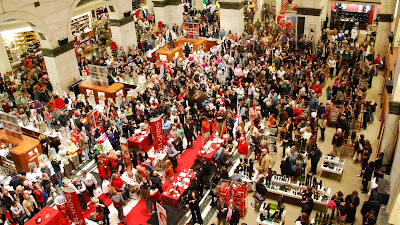 Where several stores have decided to push up their Black Friday sales earlier on Thanksgiving day, many others are doing the opposite, closing their stores for the entire holiday in a show of support for those shoppers and employees who wish to spend time with their families. In her L.A. Times article, Samantha Masunaga investigates some of the deeper reasons behind the closure, as well as the financial implications for the businesses.

Over the past couple of years, Black Friday sales have been starting earlier and earlier. Historically, Black Friday is the day after Thanksgiving and is a time when people can get good deals on new electronics like video game systems, televisions, and handheld devices. Until relatively recently, Black Friday started around midnight on Thursday night (technically Friday morning) and continued throughout the day. As companies began to realize that Black Friday sales brought in a lot of income, they started opening as early as 8 or 9 PM on Thanksgiving itself, enabling the sales to last longer and bring more customers into their stores.

This year, though, some companies are pushing it even earlier, some as early as 5 or 6 PM on Thanksgiving, which cuts family time pretty short for employees. In opposition to this, many slightly smaller companies are choosing to remain closed all of Thursday, with a belief that the few extra hours will not make much of a difference in the long run. Companies like Staples, Gamestop, and H&M have announced that its stores, headquarters, and distribution centers will be closed for the holiday. This decision, while upsetting to some potential shoppers, could potentially lead to greater loyalty among other customers who see that the companies care about enabling their employees to spend time with their families on the holiday.

Furthermore, many of the smaller retailers have come to a realization that opening their stores earlier for Black Friday doesn't have so much potential for profit. Analysts have shown that larger retailers, who can more afford to purchase big-ticket items in bulk for very reduced prices, are helped by a longer Black Friday, but that the smaller stores don't stand a chance trying to compete. So, this year the smaller retailers are concentrating on building goodwill and encouraging customers to shop online, then are opening up on Friday with their Black Friday sales. Statistics even show that those stores that opened early on Thanksgiving had a reduce in sales of about 11% over the rest of the weekend since those people who shopped on Thanksgiving were less likely to come back later.

Large companies may find out eventually that starting Black Friday on Thanksgiving does not positively affect them to the required extent to make a sizable profit. After all, when employees work on Black Friday, especially the portion of Black Friday that falls on Thanksgiving day, they get paid a higher hourly rate. At some point, the stores will reach a point at which sales are maximized while costs are minimized, at which point they will try to open their stores at that sweet spot every year. Because they continue to open ever earlier, it appears that they have not yet found that perfect time. Maybe they will eventually go back to being closed during the entire holiday, whether due to a lesser profit ratio or a surge in public opinion. It's hard to tell, so we will just have to wait and see.

Roofers and Contractors Overbooked in Preparation for El Nino Winter 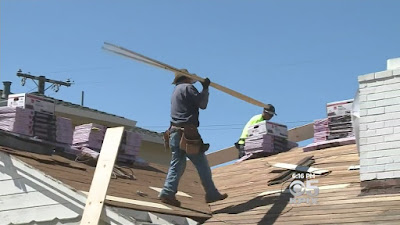 After months of drought conditions throughout California, homeowners are rushing to get their houses prepared to withstand the expected onslaught of the upcoming year of El Nino weather. Many of these homeowners are coming to realize that their roofs should be patched up or replaced before the "above-average" rainfall begins. The National Weather Service predicted that the Los Angeles and San Diego areas this winter will have about a 60-69% chance of "above-normal precipitation," which is a huge wake-up call for Californians who have experienced very little rain over the past couple of years. Ronald White, in his L.A. Times article, investigates the current rush to get ready for the winter season and the strain it has been putting on various businesses.

While many people are seeking roofers for long-overdue work on their roofs, other workers, like gutter repairers and tree trimmers, have also reported that 10 times the number of requests for their services have been made this year than the last. while the increased demand is great for business, many have been unable to keep up with demand, leaving property owners disappointed. Many homeowners have even reported difficulty getting an estimate for potential work, let alone getting contractors to their home to get the work done. Many roofing and construction companies have full waiting lists through March, but an appointment that late won't really help a homeowner trying to prepare for the El Nino winter.

Even arborists and tree services have full schedules, booked by homeowners and others worried about whether draught-stressed trees fall in the winter, potentially injuring people and destroying property. Companies like the Your Way Tree Service go out and check trees for health, as many are already dead due to disease, wood rot, or lack of water. The tree service determines whether trees are healthy enough to withstand the winter, and, if not, they fell them safely so that rough winds won't do it later.

Finally, there are those people who plan to use the rainfall later, when El Nino is over. Even they have been having trouble finding experts to install rainwater storage systems on their properties. Not only are some of these specialists booked, many others are unwilling to start work in L.A. until the demand has died down somewhat. However, they still encourage homeowners to keep calling. Eventually, they will be able to get through to a professional who is able to help them. Everyone right now has to turn away business because they simply don't have enough manpower or hours in the week to get work done for everyone.

Steve Lang, of the Roofer Contracting Association, warns homeowners against desperation. He assures them that they will eventually be able to get an appointment with a professional who knows what he/she is doing. His warning is this: hiring an unknown contractor or roofer to do work on your home could end up costing you much more in the long run, usually due to shoddy work by an inexperienced roofer or other kind of worker. He reminds homeowners to look for licensed professionals. Just because someone claims to be a roofer doesn't mean that their work will protect your home from the coming winter's rain. It is far safer and more cost-effective to be patient and wait for someone who knows what they are doing. 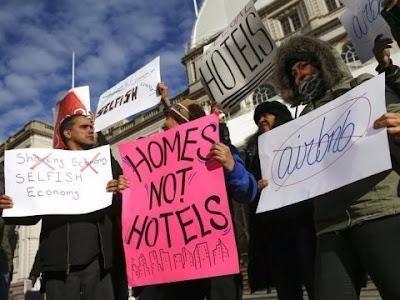 Short-term home or apartment rentals, usually through online platforms like Airbnb and VRBO, have been steeped with controversy in recent months. Some cities have even tried to ban such rentals while others have embraced them wholeheartedly. Most recently, San Francisco put forth a proposition to limit the ability of landlords to use such websites for renting their property. Tracey Lien, in her L.A. Times article, discusses how Airbnb affects both landlords and tenants, and how this new Proposition F may affect the city.

The controversy behind services like Airbnb is mainly one of a fight between a capitalist economic theory and one in which people deserve fair treatment. On the one side, tenants in San Francisco fear that the increasing prevalence of Airbnb will eventually lead the owners of their rented homes and apartments to evict them in favor of the larger sums paid by short-term renters. It is these tenants who would vote for the proposition since it limits landlords' use of Airbnb and their ability to turn normal rentals into short-term ones quickly. The proposition aims to prevent or at least slow down the conversion of apartment buildings into pseudo-hotels.

Some see it differently. While services like Airbnb could convince landlords to evict tenants in favor of the faster income, the free market could take care of any issues that arise from it. Eventually, if enough landlords raised prices enough to match the rising demand by tourists, ten the average worker would not be able to afford to live in the city. If workers are forced to move out, then business and regular city work will grind to a halt, When the economy halts in such a way, tourists will not want to visit, which will force landlords to lower their prices back to normal rates in order to get tenants. While this situation could probably work itself out, Proposition F aims to avoid it altogether.

Even for some landlords, Airbnb has uncomfortable implications. One Balboa Park resident, who had only ever rented his units out on a long-term basis voted against Proposition F. He worried that his tenants might use Airbnb to rent out his unit for short-term stays, a concept that he wasn't completely comfortable with. However,different from many tenants, he said that he would have voted yes on the proposition if he was in their shoes for that same reason: the ability to rent out the apartment in which one is living while out of town for short periods of time.

Unfortunately for those passionate about the topic, voter turnout for the proposition was extremely low. In-person votes were in the low hundreds, and mail-in votes reached about 9,000. In the end, Airbnb beat the bill, but even while celebrating, the San Francisco-based company expects further assaults in the near future. They believe that the proposition failed mainly due to its highly specific and extreme stance regarding the short-term rentals. Even so, the vote was close, with about 45% of voters supporting the proposition. Airbnb fears, rightfully, that behind the scenes, lawmakers in places like Los Angeles and San Diego may be getting ready to start the fight all over again.